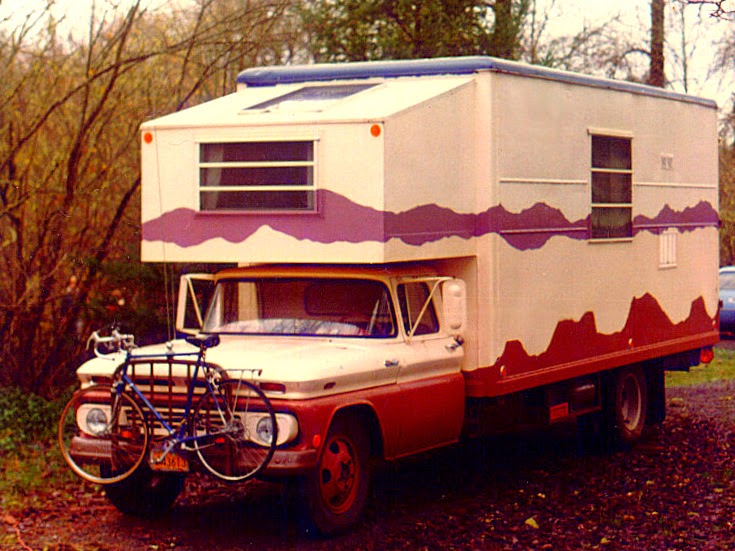 One of the best known characters of the worldwide Housetrucking fraternity and a source of all knowledge, especially relating to North American housetrucks and buses, celebrated forty years of alternative lifestyling recently.
Mr Sharkey was reminiscing with me and
I thought I'd share a little of him with you.
Forty years ago on October 10th, 1974,
I purchased a 1962 Chevrolet C40 moving van from Crest Cabinet shop in Los Angeles, California with the intent of turning it into a dwelling and escaping the hell-hole and human-zoo of that city.
On the way home, it was barely running, there was a huge Y-shaped crack in the windscreen, and the brakes were mostly for wishful thinking.
I pulled into a Mobil service station
to put some gas in it.
There were two diminutive Japanese men attending the station, and they got quite a lot of merriment from my asking for $1.00 worth of regular grade petrol. They walked around the truck, throwing their arms wide and repeating "One dolla!!! One dolla!!! HAHAHAHA!!!", obviously enjoying the fact that I wasn't going to be getting very far in this big truck
on a couple of gallons.
Gas was $0.50 a gallon then.
Here's to the next forty years my friend...