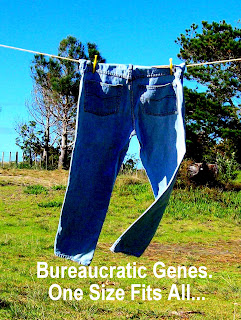 Posted by The Flying Tortoise at 1:33 PM 2 comments:

Bureaucratic Genes. One Size Fits All...

Scientists announced today, that they have, after many decades, finally isolated and identified the source of the Bureaucratic Gene... not only that but they have confirmed without doubt that the gene is stimulated or aroused when the carrier, of either sex is given powers of decision making or authority above their level of competence... (see also the Peter Principle).
It should be noted that this gene is present but latent in most of mankind.

The Gene is also activated as a result of, and especially the human male by the wearing of clothing known as a 'Uniform' or 'Badges' denoting authority. This particular example of the species is often to be seen with very closely cropped hair, particular styles of facial hair and the wearing of dark glasses even when in a dimly lit environment.
It is common for this sort of incompetent to be found in local government or in governmental departments... (note the word mental within the full word) especially those dealing with members of the public... often these men are very short... the reason for this is still mystifying scientists as they probe further into the mysteries of this phenomonem.

Well known Itinerant, Soothsayer and Progressive Luddite, Keith Levy, whoever he is, is on a mission to rid the world of this 'disease that is crippling mankind with their PCisms' as he puts it.
'I would like to shoot these idiots!' he says 'but no matter how many letters I write in triplicate and no matter how much I pay in fees or how many consultants are involved at enormous costs, they persistently refuse to issue me with a gun licence!'

Posted by The Flying Tortoise at 3:39 PM No comments: