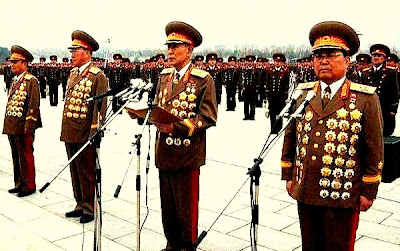 These extremely constipated looking gentlemen are the world's elite of parking wardens, the creme de la creme, the top dogs, the bees knees, the top brass, the most decorated veterans of the streets. Top revenue collectors and issuers of most of their country's parking infringement notices.
The man on the right of the picture, Major General Most Dongs has personally issued more infringement notices than I've had hot dinners.
His record for a week, set only last month at the busiest time of the year in the capital city's main shopping street was a staggering 47,563.
In just one week!
He's a cult hero in the department and the country's President is about to award him yet another dong for his services to culture and his country's coffers.
This national hero has dedicated his whole life to ruining other peoples...