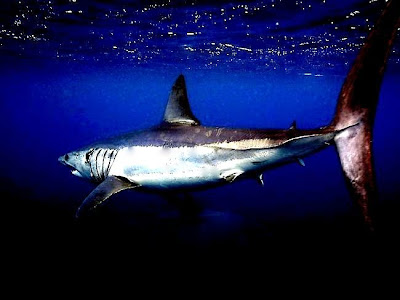 In May of the year that just was,
Carol became the first Mako Shark in New Zealand waters to be tracked using
a Satellite Spot Tag.
Scientists watched as she set off for the Pacific Islands, got halfway there only to change her mind as females are often want to do, and come back for a two month stay at New Zealand's famous Ninety Mile Beach in the Far North.
She left again, arriving at Fiji in September, and then, after seven months and more than eleven thousand kilometres, Carol had obviously decided she wanted to be home for Christmas because she was once again located just a few kilometers from where she was tagged.
A fishy tale of the one that got away.
And came back...