In This Little Auckland Cafe, You Pay What You Want To For A Cup Of Coffee... 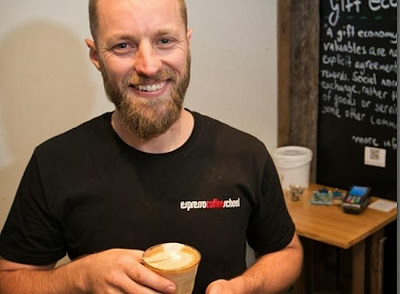 The Expresso Coffee School on Auckland's Swanson Street is small, like a hole in the wall, and its owner Adrian Nicholas is educating his happy customers about the Gift Economy,
a novel way of paying for things.
The Gift Economy has been around for a while and doesn't work everywhere, many folk just can't get their heads around the simplicity of the concept and it's just too far out of left field.
But at Adrian's tiny little cafe, the concept is working well. A blackboard displays the Wikipedia explanation of the Gift Economy and  Adrian says his takings are about what they would if he was charging normal rates for his delicious brews.
Apart from offering courses throughout the year for people wishing to start a coffee business, Adrian's Expresso Coffee School Cafe is giving it's customers food for thought...