A White Cop Stands On A Car Bonnet. He Shoots Fifteen Bullets Through The Windscreen. The Unarmed Black Couple In The Car Die. The Cop Is Charged With Manslaughter And Acquitted... 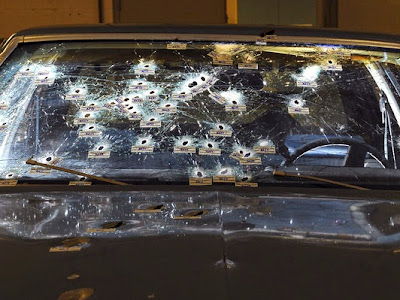 Back in 2012, Black Cleveland couple Timothy Russell and Malissa Williams' 1979 Chevy Malibu backfired while they were driving past police headquarters. Police thought it was a gun shot. Moments later thirteen policemen were shooting and chasing the car. In the next twenty two minutes, one hundred and four police in sixty two cars had chased the Chevy nineteen miles at speeds of up to 100mph. They had fired one hundred and thirty seven bullets at the car. Seconds after they ceased firing and the Chevy stopped moving, Officer Brelo jumped up onto the offending car's bonnet and in just over seven seconds, fired fifteen bullets through the windscreen citing self defense.
The unarmed occupants of the car were pronounced dead at the scene.
Michael Brelo, the only policeman held to account was charged with manslaughter.
He was acquitted because the judge said there was no way of knowing if the shots Brelo had fired were the fatal ones.
Justice in America...
Posted by The Flying Tortoise at 6:00 AM