The Chimu People In Northern Peru Were Making Telephone Calls More Than Twelve Hundred Years Ago... 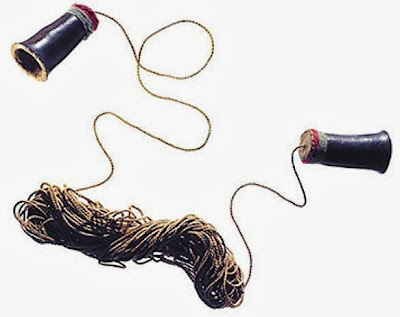 I remember as a kid, making what we called a telephone by getting a couple of baked bean cans, putting a hole in the base of each and attaching the longest piece of string I could find to them, pulling tight and having a conversation or pretending to, with a friend holding the can at the other end.
According to the Smithsonian Institute which knows about these sort of things and doesn't tell porkies, they have a gourd and twine device they say is a telephone made between 1,200 and 1,400 years ago.
They say it's possibly still functional but is too fragile to test out.
The curator, Ramiro Matos says this telephone is a marvel of acoustic engineering. The two gourds, each three and a half inches long with stretched membranes stitched around the bases of the receivers with seventy five feet of twine stretched between them comes from the Chimu Empire centered in the Rio Moche Valley in Northern Peru.
These Chimu were evidently the first true engineering society in the New World who apart from being known for their artisanry and metalwork, were hailed for their hydraulic canal irrigation systems which transformed their arid desert into agricultural lands of plenty.
There's more to know here.
And Motorola, Samsung, Nokia, Apple et all are just new kids on the block...