This Young Homeless Manila Boy Has Been Doing His School Homework By The Light Of A McDonalds Restaurant... 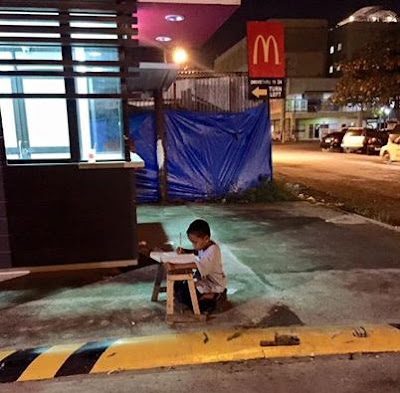 Young Daniel Cabrera knows hardship very well.
It's been a constant part of his short life so far.
His home was burned down and his father died. The homeless boy is seen most days begging on the streets of Manila with his mother.
But the young, intelligent and happy child
who's become an inspiration to so many after this image was aired on social media,
wants an education.
There are millions of children existing in poverty.
They will not all be seen on social media but hopefully some of them will be able to realise their dreams for a better future.
Despite stronger economic growth in recent years, approximately a quarter of the Philippines population of one hundred million live on less than one dollar a day.
Now, cash, clothes, a school scholarship and even a reading lamp have been offered to the nine year old Daniel who's become a symbol for the many children in similar neighborhoods.
And who dream of getting an education and living better lives... Email ThisBlogThis!Share to TwitterShare to FacebookShare to Pinterest
Labels: daniel cabrera, homeless children getting educated, homework by the lights of mcdonalds, if you can dream it you can do it, living in poverty, manila, the philippines