We All Know Why The Chicken Crossed The Road But Which Came First? The Chicken Or The Egg... 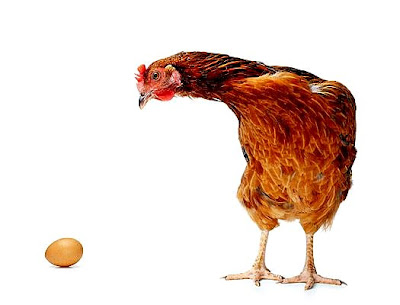 Chickens as a species became Chickens through a long slow process of evolution.
At some point, evidently, a chicken-like bird produced an offspring that, due to some mutation in its DNA, crossed the threshold from mere chicken likeness to chicken actuality.
That in quasi-scientific terms is to say a proto-chicken gave birth to a real-life official chicken. And since the real-life official chicken came out of it's own egg, we can now answer one of the most puzzling questions ever put to mankind.
The egg came first.
And if you got that right then give yourself an Eggsellent...

Email ThisBlogThis!Share to TwitterShare to FacebookShare to Pinterest
Labels: eggsellent, evolution, mankind, puzzling questions, which came first? the chicken or the egg, why did the chicken cross the road