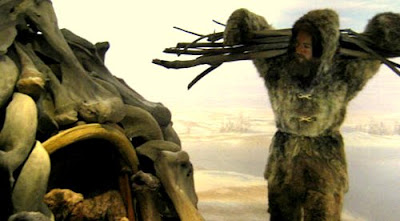 An interesting post on Michael Janzen's Tiny House Living today tells us that a 44,000 year old Neanderthal bone house has been found near Moldova in Eastern Ukraine.
It's 26 feet wide at its widest part and there's good evidence that these Neanderthals weren't stupid cavemen.
They evidently cooked vegetables, buried their dead, crafted their tools, produced jewelry and probably had language.
They seem to have disappeared about 10,000 years after modern man arrived in Europe.
Further evidence that these people were very smart but why did they wait so long...

Posted by The Flying Tortoise at 1:13 PM