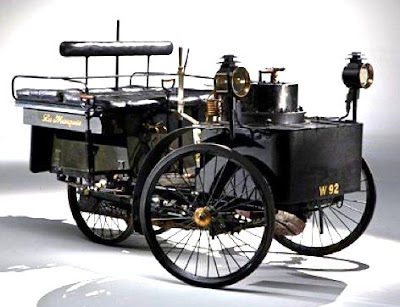 Said to be the oldest automobile still running, this steam powered jalopy, build in 1884, sold at auction last week for 4.6 million dollars.
It's a De Dion-Bouton de Trepardoux and was originally built for the French Count De Dion, one of the founders of the famous car company.
Fueled by wood, coal and paper, the car takes about thirty minutes to get up enough steam to drive.
At a top speed of 38 mph it was probably the first car to get the speed wobbles...

Posted by The Flying Tortoise at 8:57 AM