When Wicked Is Very Very Bad... 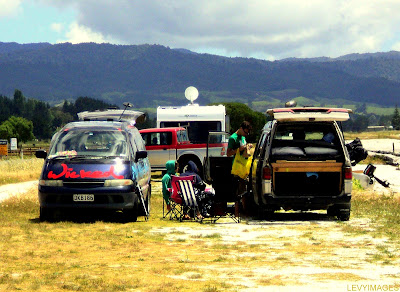 Two German tourists seen in this photograph, both from the Wicked Camper on the left were seen urinating in the open by a number of motorhomers yesterday at Ray's Rest at Kaiaua, on the Firth Of Thames.
Exactly the same place as a Frenchman in a Jucy Camper was photographed urinating a few days ago.
Somehow, some tourists think that New Zealand is one giant receptacle for them to relieve themselves at their convenience wherever and whenever they like!
Is that why they come here?
Would they like us to do it in their countries?
Would they give a damn?
These two Wicked tourists were approached by people here and were asked if they had a toilet. No was the reply. There's nothing wrong with what we're doing they said.
These are the sort of people who are giving 'Freedom Camping' a bad name in New Zealand and create huge problems for the folk who have spent many hundreds of dollars making their vehicles 'self contained'.
The president of the NZ Motor Caravan Association said a few months ago that 'these people should be shot!' I didn't agree with his 'figure of speech' at the time...
I've phoned Wicked and was told that the boss doesn't speak to people on the phone.
Such amazing arrogance!
Perhaps he'll answer my email.
Perhaps he'll do something about his clients showing disrespect to my beautiful country.
Perhaps pigs will fly...

Posted by The Flying Tortoise at 9:18 AM