Boys Will Be Boys... 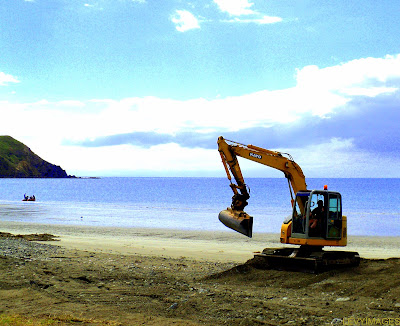 And some boys given a little authority and a bit of freedom will often act like irresponsible juveniles and even vandals.
When I was a kid, I took my bucket and spade to the beach.
How things have changed.
This monster digging machine is what New Zealand's bureaucratic Department of Conservation is using to 'fix' the beautiful beach that wasn't broken at Port Jackson.
With a mind of their own and no mind to consider anyone else's opinions, they impose rules, put up fences, restrict the enjoyment of campers and act as if they own the land and the beach.
They don't of course.
You and I do, but try telling them that.
As I've mentioned before, I'd shoot all bureaucrats but they won't give me a gun licence...

Posted by The Flying Tortoise at 10:08 AM