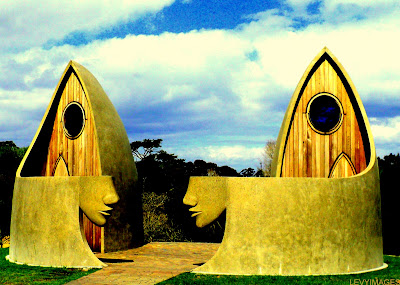 When the Rodney Council ran a competition to design a toilet facility for the lovely Matakana Village, Mike de Haan, a local potter of distinction, thought it would be a good project for him to enter.
Like father like son, so did 17 year old Steffan de Haan who thought he might do a pretty good job.
The judges thought so too and awarded the prize to Steffan whose design was chosen from 25 entries.
The winning design as is so often the case, has been controversial ever since.
It was finally 'opened for business' in 2009 and has become an iconic landmark for Matakana, already famous for it just being Matakana, its weekend markets, its wineries, fabulous food and its amazing art.
Steffan, after studying sculpture at Elam Art School in Auckland decided architecture was his thing and is now at Wellington's School of Architecture.
Another Hundertwasser perhaps...

Posted by The Flying Tortoise at 11:16 AM