That Roundhouse is Tony Wrench and Jane Faith's beautiful almost hidden home.
It was built in 1997/98 by them, their friends and volunteers from recycled materials in Pembrokeshire County, Wales without any planning consents or permissions.
The design is based on the Celtic Roundhouse.
It's a wooden framed, cobwood ecohome with a straw insulated turf roof, solar and wind turbine generated electricity, compost toilet and with reed beds for grey water.
Discovered by the bureaucrats from the air sometime later, a ten year battle ensured.
Eventually Tony and Jane won the battle and in doing so became the inspiration for thousands of people around the world.
Tony and Jane live luxuriously,
well below the poverty line.
Their realised dream has made
a great contribution to our world.
You can go to www.thatroundhouse.info/
or as with most things these days,
simply google That Roundhouse
to follow the ongoing story.
And Tony tells me
they do harvest grapes on the roof... 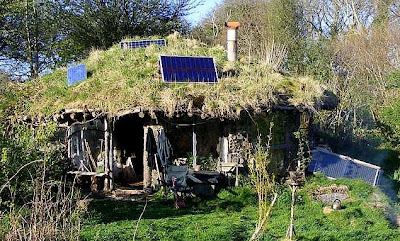 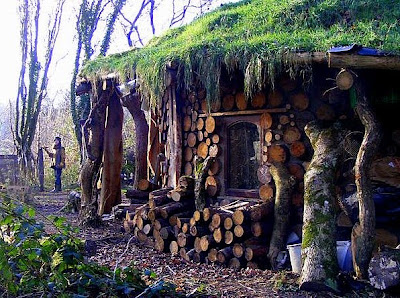 Posted by The Flying Tortoise at 11:38 AM