Imagine What A Wonderful World It Would Be... 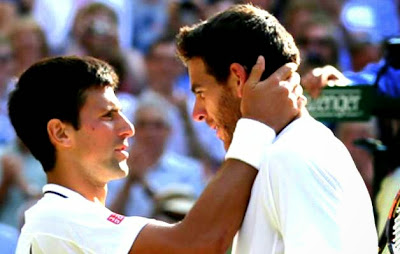 Imagine all the world's conflicts being decided on a world stage like Wimbledon.
Imagine the two gladiators, the combatants, the two fine sportsmen or women fighting a glorious battle as the one seen in this year's men's  semi-final at Wimbledon that featured Novak Djokovic and Juan Martin del Potro.
Imagine that there might be only one victor but both of these remarkable players were winners.
And imagine the participants embracing after the hard fought battle as these two noble warriors were able to do.
Each applauding the other.
What a wonderful world it would be...